The spot in the middle of the street…covered with teddy bears. Ferguson, Mo. 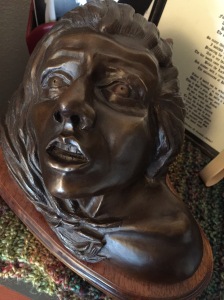 A few days ago I spent some time in Ferguson as they came upon the one-year anniversary of the shooting death of Michael Brown.  I walked the streets where Michael Brown laid for “4.5 hours.”   I saw the business district where buildings were burned and destroyed, some still showing the effects with boarded-up windows and fences, while other businesses were repaired and open to the public. I listened to the people and pastors tell their story. I heard what they experienced a year ago, how it affected them, and how hard they worked this year to make peace in their town.  The people of Ferguson have truly done good and difficult work to bring peace to their town.  And today, I am watching the news that Ferguson is reeling in pain again, and I’m thinking the people I met are praying for peace.

Jesus had a time of lament in Matthew 23.  He takes himself away from the crowds and cares of the world, and cries and agonizes over Jerusalem.  He grieves over their treatment of their prophets, over the hypocrites in the religious circles, and over the rule-keepers who forget the parts of the law that include justice, peace, and faith. And he cries out his wish to gather those who have lost their way under his wing, like a mother hen gathers her chicks.  This gathering under his wing is for a purpose:  to protect, shield, and reform… Jesus’ cry-out came from the depths of his love for Jerusalem, a town that mattered.

Ferguson matters too.  The people of Ferguson are valued and cherished in God’s eyes.  They are people of worth, with hopes and dreams, with children and grandchildren, and with an innate desire for peace.  When their town is in danger, they cry out too.

The picture above is titled, “God Counts the Tears of Women.”  My sister formed it with her strong hands and compassionate heart.  Psalm 56:8 says that God counts or collects our tears in a bottle.  There’s a whole lot I could say about that, but mainly the “bottle of tears” are signs of exteriorized love and pain.  And often the women cry out, wishing we could gather our loved ones under our wings to protect, shield, and reform…  It is intuitive in us…

Our collective hearts go out to the beloved and beautiful people of Ferguson today, and we do what we can:  tell the story, allow safe places for lament, and create avenues for peace.  And we pray.